2016 seems to have flown by really, especially when you consider how little I have achieved over the last 12 months. On the last day of the year I thought I’d take a look back at my 2016.

January saw me having my first major operation of the year. In a bid to stave off a more serious operation I had an ankle arthroscopy. It was pretty successful although I have since been told I will need the more serious total ankle fusion in the next 12 months. I was off work for a few months and spent a lot of time on crutches.

January saw me have a change of hair colour – I went from blonde to bright purple! I also had a very short a-line bob, the shortest my hair has been in years!

In February, my gorgeous best friend Helen and her partner, Pete gave birth to a gorgeous baby boy, James Robert. He is such a cutie!

March saw my second hair colour change of the year – Lilac. I went back to work in March too.

In April, Neil gave blood for the first time, I am so proud of him. I changed my hair colour again to pink and had a shaved side / undercut. I also got my first tattoo of the year in April, a second carousel horse on my shoulder.

May was an up and down month for me, I found out that I would need a Total Hip Replacement, I took a while to come to terms with it, I struggled with how my body was letting me down and I was worried at the sheer size of the procedure.

I changed my hair colour again in May and went for a bright pink and purple ombre. Neil gave me a lovely day out for my birthday mid May which was one of my favourite days of the year.

Neil celebrated his birthday in June. I got my second and last tattoo of the year, a lovely Russian Doll Cat on my arm.

Mum and I went to see the amazing Rod Stewart at Home Park in June – such a fabulous night. I also had my first pre-op for my hip replacement in June, I even got to play with a prosthetic hip. 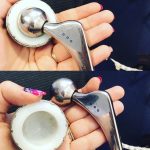 July was a pretty busy month. I saw my dietician and found out I was very likely lactose intolerant. We also said goodbye to my rabbit Bates in July as he sadly passed away.

Late in July, I changed my hair colour again and we attended a very lovely wedding where our family friend Nina married Joe in a beautiful and moving ceremony at Missenden Abbey. We managed to squeeze in a fabulous visit to the Roald Dahl Museum whilst we were away too.

My hip replacement had originally been scheduled for the end of August but was cancelled as my new hip needed to custom made and wasn’t ready. We’d already cancelled the holidays we were going to have this year and I was feeling pretty sorry for myself. My Mum and Dad then cheered me up by taking me on holiday for a few days to Shrewsbury. I had a lovely time and was thoroughly spoilt.

Neil raised £328.75 for Fairy Bricks in August by running 5k for their virtual 5k. He did a really good job and ran an excellent time!

Mum, my Godmother and I went to see the very wonderful Let It Be at the Theatre Royal, Plymouth in August as well.

In September we managed to squeeze in a quick few days in Cornwall just before my operation. We spent a day at Paradise Park and I had a lovely day. I was also lucky enough to discover that I had an 18mm bladder stone that would require surgery to remove it.

I had my right hip replaced at the end of September and spent a few days in hospital. 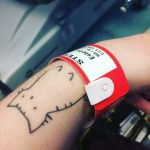 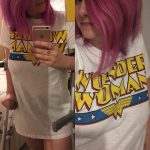 In October I was pretty house bound and in pain. My bladder stone was causing me pain and my hip precautions meant I would have to wait for surgery to remove it. My hip replacement caused me some pain too during October and I was very reliant on Neil, my parents and my crutches. Neil had his first tattoo in October, I am certainly a bad influence on him. Neil also undertook the Plymouth 10k in October.

I changed my hair colour again in October from pink and purple to blue and turquoise. I love it! I also wrote about my hip’s recovery in October.

November was another quiet month, I was nominated for employee of the year and me and my work colleagues attended an awards ceremony, I didn’t win (obviously, I hadn’t been there for most of the year!!) but I did get to wear a fabulous dress and look chubby.

I saw my consultant in November who referred me for some physiotherapy to help with muscle weakness. I was down to one crutch and was given a walking stick as well. I wrote another update on my recovery too.

The last month of the year saw me give up both crutches and really put my new hip through it’s paces. I started Hydrotherapy too which I am really enjoying. I also had the pre-op for my bladder stone surgery.

Early in December we said goodbye to Rufus who after a hard fought battle sadly passed away.

I had my works Christmas party at the start of December and wore the sparkliest dress ever.

My friend Helen and her partner Pete had their second baby, Elliot Michael who I had lots of fun visiting and snapchatting with his brother James at the start of the month.

We had a lovely Christmas and I got some fabulous Christmas presents.

December also saw me take part in Blogmas for the first time, I had a lot of fun creating a post for each of the first 24 days of December and I wrote about Christmas Crafts, what I really wanted for Christmas, lots of nail art and the best gifts for your cat amongst other things.

I had some really great blogging opportunities in 2016 and was lucky enough to be able to review things for Juicy Fuel Cola, Michael O Mara Books and Silly Yak Pastry over the year. I hope to be able to create some more blogging opportunities in 2017. I’ve also made some great blogging friends this year, Kelly at ThisTattandtheOther, Sarah at RaiinMonkey, Becca at QueenBeeBecca and Stacey at UnicornFairy to name a few of my favourites.

This year wouldn’t have been possible without Neil and my parents, especially these last few months. I’d also like to express my love for the care packages and support that Katie and Stacey provided me with after my operation in September. Stacey especially has been so supportive over the last few months and I really appreciate that.

I had a lot of goals and plans for this year, but I haven’t managed to achieve any of them and I feel a little like I has wasted 2016. Having said that, I think I had a tough break health wise this year and I’ve struggled to keep my head above water so I think just getting to the end of the year is an achievement in itself.

With 2o17 just around the corner and an ankle fusion and bladderr surgery ahead of me, I think I will try to take each day as it comes.

How was 2016 for you? What memorable moments stick out for you? Get in touch below.