Festive Films are practically a staple of the Christmas Period, it is almost compulsory to watch a Christmas movie during the festive season. Everyone has their favourites and these are a few of mine. 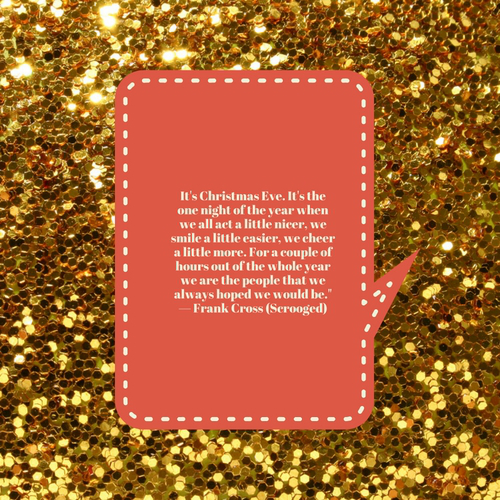 I have to start with Elf. I am pretty sure that most people have seen Elf and the vast majority of people that have seen it love it and can quote it at length. If you haven’t seen Elf (seriously though, if you haven’t, have you been under a rock?) here are a few things you should know.

Elf was released in 2003 and was directed by Jon Favreau (he was Monica’s rich, cage fighting boyfriend in Friends FYI), the story is about  Buddy, one of Santa’s elves who learns of his true identity as a human and goes to New York City to meet his biological father, spreading Christmas cheer in a world of cynics as he goes.

The best way to spread Christmas cheer, is by singing loud for all to hear

It is such a funny and heartwarming tale, with so many memorable moments, it is probably one of my all time favourite films.

I adore the Muppet Movies. They are funny and have some of the best songs in them – Muppets Take Manhatten is a classic, so when the Muppets take on Charles Dickens, throw in some laughs and some brilliant songs alongside a fabulous performance from Michael Caine, what’s not to love. The best part is that the story actually sticks pretty faithfully to A Christmas Carol whilst portraying Tiny Tim as a little frog.

Released in 1992 and directed by Brian Henson (it was dedicated to Jim Henson who sadly passed away during pre-production), the Muppets tell the tale of Ebenezeer Scrooge, a mean old miser, who after a visit from the ghosts of Christmas Past, Present and Future changes his mean old ways. Each song is a classic and seeing Michael Caine sing Thankful Heart is a real joy.

The Nightmare Before Christmas

There is some argument as to whether this is a Christmas Film or a Halloween Film, released in 1993, produced and conceived by Tim Burton, it was originally a poem:

….Jack was confused and filled with great grief.
Not knowing where to turn, he looked toward the sky,
Then he slumped on the grave and he started to cry.
And as Zero and Jack lay crumpled on the ground,
They suddenly heard a familiar sound.
“My dear Jack”,said Santa,”I applaud your intent.
I know wreaking such havoc was not what you meant.
And so you are sad, and feeling quite blue,
But taking over Christmas was the wrong thing to do.
I hope you realize Halloween’s the right place for you.
There’s a lot more, Jack, that I’d like to say,
But now I must hurry, for it’s almost Christmas day.”
Then he jumped in his sleigh, and with a wink of an eye,
He said, “Merry Christmas!”, and he bid them good bye.
Back home, Jack was sad, but then, like a dream,
Santa brought Christmas to the land of Halloween.

It tells the story of Jack Skellington, a resident from “Halloween Town” who stumbles through a portal to “Christmas Town”. He decides to celebrate the holiday, with wonderful, terrible and funny consequences. Personally, I firmly believe that The Nightmare Before Christmas belongs firmly in the Christmas Movie Hall of Fame.

There have been many festive adaptations of Charles Dickens, A Christmas Carol and Scrooged is a big favourite of mine, starring Bill Murray who I have big love for. Released in 1988 and directed by Richard Donner. Frank Cross runs a US TV station which is planning a live adaptation of Dickens’ Christmas Carol. Frank’s childhood wasn’t a particularly pleasant one and he doesn’t appreciate the Christmas spirit. With the help of the ghosts of Christmas past, present and future,  in true feel good movie style, Frank realises he must change.

Jingle All The Way

Released in 1996 and starring Arnold Schwarzenegger, this is another typical feel good Christmas movie, the story tells of two rival fathers, workaholic Howard Langston  and stressed out postal worker Myron Larabee both desperately trying to get a Turbo-Man action figure for their respective sons on a last minute shopping spree on Christmas Eve. I figure alot of parents can relate to the story – who remembers when Furbees and Teletubbies sold out?

There are two versions of The Grinch that I adore. First is the 1966 TV Movie Special, directed by Chuck Berry (of Tom & Jerry fame) and voiced by Boris Karloff.

Both versions are based on the childrens book, The Grinch Who Stole Christmas by Dr Seuss, it tells the story of the Grinch trying to take away Christmas from the townsfolk of Whoville below his mountain hideaway.

in 2000, Jim Carey starred in The Grinch, directed by Ron Howard. In order to make the film feature length, some new rhymes and included more back story about Mr Grinch. 2018 will see a new CGI retelling released featuring the voice of Benedict Cumberbatch.

There are so many brilliant Christmas movies, ranging from the romantic comedies such as Love Actually and The Holiday, to classics like Home Alone, Die Hard and White Christmas. I will take a minute to mention Home Alone 1 and 2 (Lost in New York) and query why Kevin Mcallister was never removed from his parents home and placed in safe custody after he was abandoned at Christmas for the second time.

I will be watching all these festive films and more this Christmas and I can’t wait.

What is your favourite Christmas movie? Let me know below.