This is Rufus Robson. He is about 6 years old. Here he is mid sniff.

He was so little when we got him. He’s always been so laid back. 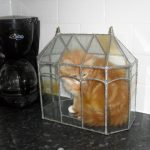 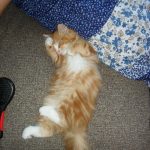 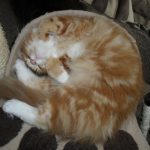 He’s always been a bit special and has been on prescription cat food for a long time – he suffers from bladder crystals – which in a little boy cat are excruciatingly painful. He isn’t allowed dry biscuits and we only feed him the prescription cat food, which isn’t cheap – Neil buys ours from Animed which works out a bit cheaper than buying it from our vets. We have another cat who also suffers from bladder crystals and he also follows a prescription diet.

Almost two years ago (to the day actually) Rufus was due his annual booster injections, he’d been a bit under the weather so we mentioned it to our vet, who then gave Rufus a thorough check over. Rufus was found to have a pretty high temperature and after much squeezing of the poor little guy they suspected a tumour or an inflamed intestine. We were asked to book him in for the next day where they would do some tests and xrays and try to find out what going on, in the meantime we agreed for him to miss his boosters until we knew what was going on and we took him home again.

Here he is that night. He was looking pretty sorry for himself.

So the next morning, we dropped him to our vets and we both went to work. A few hours later I got a call from the vet – they’d found something and wanted to operate to investigate further and potentially remove anything they found. I agreed and it was decided they would call again later to let us know what was happening.

When they called, it was pretty bad news. Rufus had Necrotising Pancreatitis. They had to remove part of intestines and whilst removing it they had nicked his pancreas. This was the first of many days that Rufus had to spend at the vets. It was touch and go and every day we would phone the vets for an update, we discussed every day whether we should just let him go but the vets were optimistic and hopeful that they could pull him through. At one point, Rufus stopped eating, he was wasting away and we agreed that if it came to him having to be tube fed then that would be too much for him. I visited him on what we assumed might have been his last day. He was so weak but he managed to purr his stupid little face off. I chatted with the vetinary nurse who was trying to find a food that might encourage him to eat and as we talked we realised that they had been warming his food. Rufus is a fussy eater – he only likes his food cold, we have to keep it in the fridge. Once Rufus got cold food, he started to eat again, he perked up and we were finally allowed to take him home.

He lost alot of weight and dropped to his lowest weight of around 1kg. He had shaved patches of fur where they operated, put his drip in and performed other tests.

He was a changed cat. As a result of nicking his pancreas whilst they tried to remove the bad parts of his intestines he had developed diabetes. Diabetes in cats is the inability to produce enough insulin to balance blood sugar, or glucose, levels. Left untreated, it can lead to weight loss, loss of appetite, vomiting, dehydration, severe depression, problems with motor function, coma, and even death.

Since the day we bought him back home, we have to inject Rufus with Insulin twice a day around 12 hours apart. 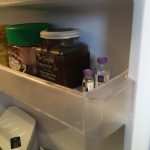 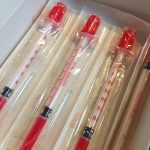 His Insulin has to be kept in the fridge (much like regular human diabetes, many of the guidelines are the same) and he has to be fed at roughly the same time every day, twice a day. We feed him at 0700 and 1900 with a little leighway either side of these times. He eats a controlled amount of food and around 30 minutes after he has eaten, we have to inject him.

We have to monitor Rufus for signs of hypoglycemia – the signs can include lethargy (although Rufus has always slept a lot, ever since he was a kitten so for us, this isn’t always a cause for concern), anxiety, weakness, difficulty standing, muscle twitching etc. When Rufus hits very low blood sugar, he lies differently, he pants and he cant’t stand up. His low point is usually the middle of the day and if his blood sugar becomes very low, we are sometimes able to pull him back by getting some sugared water into him. Unfortunately though, sometimes it becomes dangerous for us to deal with and he has to be taken to the vets immediately. Helpfully, Rufus usually waits until our own vet is closed and we have to make an emergency, very expensive dash to the emergency vets.

Thankfully this has only happened a handful of times. Most recently was the most frightening for us though and Rufus’s blood sugar dropped so low that he became blind. He spend the rest of the night at the emergency vets and amazingly his sight came back once he had stabilised. 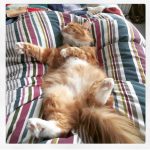 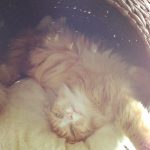 Every 4 – 6 weeks, Rufus spends a whole day at our vets, he has a glucose curve and they check his Insulin dose is correct. We’ve had rather a lot of trial and error and the vet thinks that every so often what is left of his pancreas tries to produce it’s own insulin which is what occassionally throws his blood sugar out. He is thoroughly spoilt whilst he is there and spends a large part of the day being cuddled. I would highly recommend our vets, based in Plymouth – Elm Vetinary Group. We have been rather unlucky when it comes to our pets health and our vets have always been completely fantastic, friendly and helpful.

We have to regularly order the Insulin and syringes from the vet and the costs add up. Having a diabetic cat is a costly, demanding affair. We are tied to the twice daily feeding and injections that Rufus requires, which means if we want to go away, or out for dinner we have to plan it around Rufus.

Do you know what though? We wouldn’t change a thing. There have been a few times where we thought that it was the end for him and every time he has bounced back none the worse for wear. He is a wonderful little cat and has never batted an eyelid at anything we have ever had to do, he doesn’t bat an eyelid when we have to inject him and he shouts at us if we are ever late feeding him. He is a little fighter. He is now back to a healthy weight and behaves like any normal cat.

Having a pet with any illness takes dedication and money. Thankfully, Rufus is insured and I can’t stress enough the importance of ensuring your pets are insured and that they have annual check ups and any booster injections. Looking after a cat with diabetes is hard work, I’m not going to pretend it isn’t, but having Rufus healthy, bright eyed and well is worth the time and effort that goes into his care. 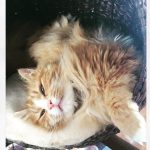 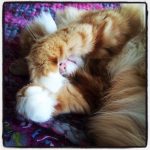 Do you have a pet with diabetes? Do you care for a pet with an illness? Let me know below.

edit. We sadly lost Rufus in December 2016, after what we thought were a series of very low blood sugars and hypos, we discovered that he had actually been having fits and that the pancreatitis had come back. He was taken off the insulin for around a week and then took a turn for the worse. The vet sent us home with him on his last evening and we intended to make a plan in the morning to decide what to do next, overnight he had a mini stroke and all but lost the use of his back legs and with advice from the vet we made the decision to have him put to sleep. He was a fighter right to the end.