Little Nightmares is one of a few games I treated myself too recently. It’s a platformer, puzzle game by Tarsier Studios for Bandai Namco. Originally announced in 2014 and titled Hunger, it wasn’t until 2016 that it got a name change. It was then released earlier this year. You may know Tarsier for LittleBigPlanet.

Little Nightmares reminded me alot of Studio Ghibli, especially Spirited Away. I recently read that Little Nightmares will be adapted into a television show which I think will be really interesting. 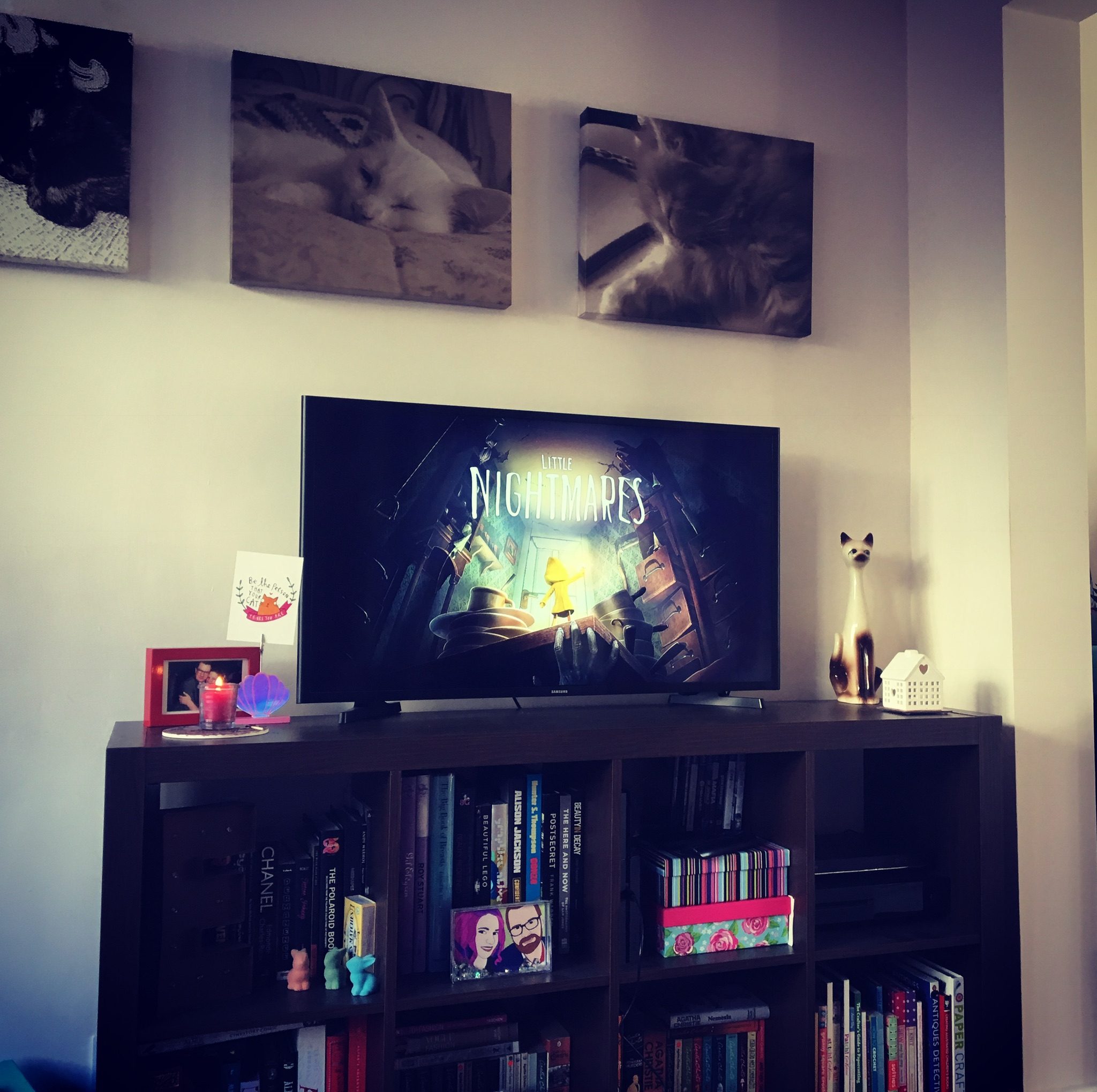 The game follows the story of Six, a small and hungry nine year old girl who is trapped inside The Maw, a very strange ship which caters to the whims and odd wishes of the rather frightening passengers. Six decides to escape the ship and along the way has to escape the clutches of some very unnerving monsters. Six suffers regular bouts of extreme hunger, leading to some rather extreme meals.

The enemies of the game are grotesque and terrifying, you encounter The Janitor first, a long armed, short legged blind man, who scared the crap out of me, I wasn’t a fan of him at all, his main purpose seemed to be capturing children and Six, presumably for the passengers to eat. Once he has been dispatched (this took alot of wimpering from me and the game almost went in the freezer – where all the frightening things go), you head further up the ship.

The horror continues with a pair of rather unpleasant twin chefs – who also seem intent on killing Six – at one point when I was captured by them I was thrown rather brutally into a hot oven, another time I had my head cut off with a meat cleaver – not ideal really.

Once I got Six to finally manage to escape the kitchens of the ship – which would definitely not be getting a good hygiene rating from the local council and totally need a visit from the Food Standards Agency if you ask me, I managed to eventually evade them and make it to the outside of The Maw, where a number of grotesque, blobby monsters are heading into the ship, I assume to eat the feast that the chef twins kept trying to add me too. Heading further into the ship and avoiding being eaten by the guests you eventually end up fighting against the Lady – a very unpleasant Geisha who really doesn’t like Six at all!

The game reaches it’s rather odd conclusion leaving you wanting so much more.

Little Nightmares was a very short game, I completed it in a few hours (with assistance from Neil after I’d been eaten by a dumpy, scary passenger for the 11th time in a row).

The graphics, music and overall atmosphere of Little Nightmares is fantastic, it pulls you in, freaks you out and makes you consider sleeping with the lights on. With no real dialogue the ambient sounds in the background, along with the music, really set the scene in this game. Simple puzzles and gorgeous backgrounds make this game a delight to play. Controls are nice and simple if a little on the clumsy side at times. The game crashed a few times and after restarting had dumped me back in an odd check point. Autosaves were frustrating as well, often meaning once you had completed a rather tricky part of the game, if you died you would be put back to that rather tricky part of the game! I was frustrated by how short the game was, leaving me feeling a little short changed.

There are apparently some expansion packs available now for Little Nightmares, allowing you to better explore and understand The Maw and the world outside it. I will definitely be looking into playing them soon.

If you are looking for a simple, yet frightening and atmospheric game to occupy you for a few hours then Little Nightmares is the game for you.

Have you played Little Nightmares? What did you think? Get in touch below.